Search engines use crawlers to find new and updated content. Content can range from web pages to PDF files and images. What all content have in common, however, is that they're discovered via links.

The most important crawler is Googlebot, Google's crawler, because more than 90% of searches are performed via Google. It works by visiting web pages on its index and then following the links within those pages to find new pages. Thus, Googlebot can discover new and updated content by following links, which is why backlinks are still a key ranking factor.

When you search on Google, Google will check its index for relevant content and rank it to answer your query. In theory, the highest-ranked result will be the best and most relevant to your query. However, in practice, that's often not the case.

Our SEO analyst set out to establish how Googlebot crawls affect page ranking and the dependency between crawl frequency and URL performance. Here is what they discovered.

The analysis is based on a UK-based website's actual data with average monthly organic search impressions of 1.2M and 3.5k indexed pages.

For this analysis, the team combined data from Googlebot crawl events (GET requests from google.com/bot) and Google Search Console's daily URL performance for a period of 15 days in September 2020.

Predictably, the more frequent the crawls, the higher the number of daily impressions and clicks were. The ranking of these pages was also higher. 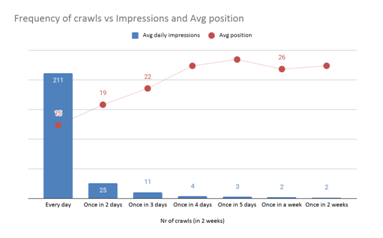 You'll agree that with age, children tend to get taller. A statistician would say there was a very strong positive relationship between age and height. The Pearson coefficient of correlation would range from 0.70 to 1, depending on the study sample.

Likewise, the higher the speed of a car, the shorter the traveling time; if you drive faster, you'll arrive at your destination sooner. We then speak of a very strong negative relationship between speed and travel time. In this case, the coefficient would range from -0.70 to -1.

How are Crawl Frequency and Page Ranking Connected?

To determine how Googlebot affects page ranking in the days after a crawl, the analyst combined data from three sources: a list of crawls and their frequency for a period of two weeks in September 2020 and the avg daily position of each keyword and the corresponding URL.

They noted the position of each keyword and URL;

They filtered out URLs that were crawled more frequently than once every three days because these could have been affected by previous crawls, potentially resulting in data inaccuracy. They also filtered out keywords that had no position data on the day before the crawl.

High-ranking URLs were less volatile. For first, second, and third-ranked URLs, the average day-to-day change was just 0.13 compared to 2.08 for URLs ranking 21st or lower.

What do These Findings Mean?

If your site isn't crawled and indexed, it won't appear on the SERPs. That is the only thing that is obvious. We have seen a correlation between crawl frequency and page impressions, as well as crawl and page ranking movements.

However, based on our understanding of how Google's algorithm works, the page ranking movement in relation to crawl is most probably due Google's re-calibration of the page's ranking after they've crawled it and re-calculated its 'relevancy score'. Since page impressions is directly tied to rankings, that is also directly impacted by that crawl.

Our advice is to check how many of your pages are indexed on your site and whether Google is crawling and locating all of the pages that need to be crawled or is it wasting the crawl budget on URLs that shouldn't be crawled. This is generally only an issue with very large websites.

To check if all of the important pages have been indexed, you can check Google Search Console > Coverage.

You can help to prioritize URL's crawl rate by increasing the quantity and quality of internal and external links pointing to it. You can also ensure that you are not wasting crawl budget on low-priority pages by decreasing the number of internal links pointing to them, make those links nofollow, or by adding a disallow crawl instruction on robots.txt file for these URLs.

These will point Googlebot in the right direction in terms of crawling your web content, which will increase your control over what ultimately appears in the index.

Self Storage SEO Guide: 8 Steps To The Top of Google 2022

We only work with businesses we can actually help through SEO. Contact us for a Free Website Analysis.